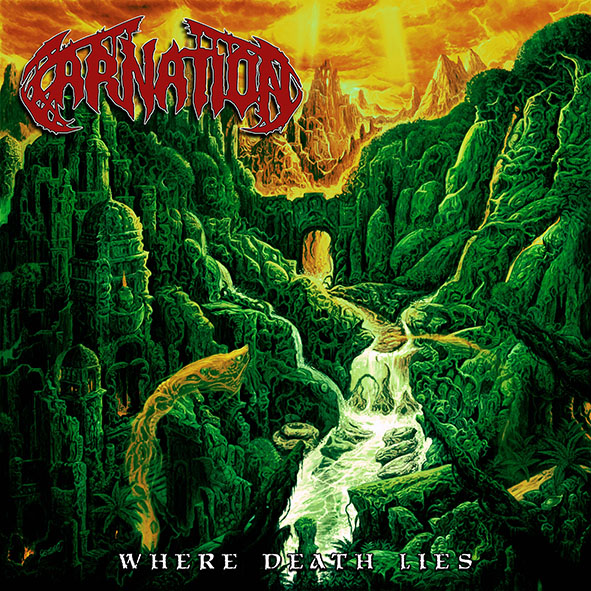 After releasing their glorious ‘Chapel of Abhorrence’ debut album in 2018, CARNATION has been on a relentless warpath, conquering festivals and venues across the globe. The Belgian death metal quintet is now ready to unveil the successor to their debut release, which is aptly titled ‘Where Death Lies’. The album is set to be released on September 18th, 2020 on Season of Mist.

CARNATION comments:
“After two incredible years in service of the ‘Chapel of Abhorrence’, the time has come to venture forth into a new domain. Tirelessly, we have been building our new aural soundscape for months, and we are now ready to present what the future will hold. Prepare to witness an improved Carnation in every way possible; ‘Where Death Lies’ awaits.”

The album was recorded at the Hertz Studio in Białystok, Poland (Drums) and at the Project Zero Studio in Nijlen, Belgium (Guitars, Bass and Vocals). Mixing was done by our very own Yarne Heylen and the mastering process was handled by Jens Bogren at the Fascination Street Studios in Örebro, Sweden. The album cover was once again made by the magnificent Juanjo Castellano Rosado.

‘Where Death Lies’ features 40 minutes of unrelenting death metal. We will present the first single of the album on July 8th, 2020.